Sure, you could buy any old greens, chop up some tomatoes and other good-looking finds, and create a salad that’s perfectly healthy and perfectly ordinary. But vegetables can be so much more fun than that, as Israeli-British author Yotam Ottolenghi makes so obvious in his vivid and imaginative cookbooks.

Now, Plenty More, Sweet, and Ottolenghi’s other publications are not exactly known for the simplicity of their recipes. That’s why his approach to butternut squash caught us by surprise—there’s only a handful of ingredients, but they’re doing a whole lot of work.

Roasting squash is one of the few culinary pleasures that winter provides. With two simple sauces, though, the squash becomes a playground for totally opposing flavors and textures. Mixing greek yogurt with Sriracha? Tangy meets spicy. Contrast it with a puree of cilantro and garlic? Now we’re getting weird.

We’ve modified this recipe to our own preferences, with sunflower seeds instead of the original pumpkin seeds. Sweet potato could act as a good replacement for butternut squash, if you can’t find it or don’t want to deal with peeling (although we found an easy method for that). Both are usually winter veggies, but taste this and tell me it wouldn’t sit perfectly next to a plate of BBQ wings or a black bean burger. Just make sure you invite us to the party. 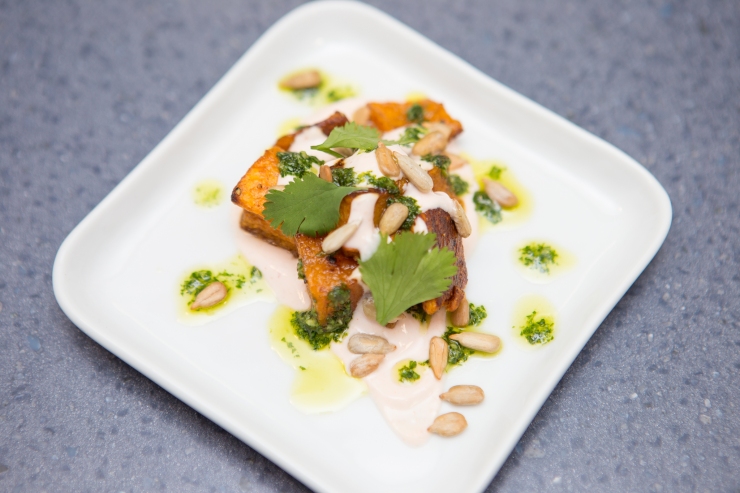 Preheat your oven to 425 degrees.

If you’re using a whole squash, first poke the skin all over with a fork. Use a large knife to cut off each end. Microwave for about 3.5 minutes, or until the skin is softened. Let it cool, then peel the rest of the skin off. Slice vertically in half, and use a spoon to scoop out all the seeds. Then cut into bite-size cubes. (Alternatively, you can buy a package of pre-cut squash, but that’s often more expensive.)

In a large bowl, toss the cubed squash with cinnamon, cayenne,  salt, pepper, and olive oil until evenly coated. Coat a baking sheet (or foil-covered sheet) with cooking spray, and arrange the squash in a single layer. Roast for about 35 minutes, or until starting to brown. Set aside to cool.

When the squash is done, reduce the oven to 350 degrees. Arrange the sunflower seeds on a separate baking sheet and drizzle with remaining olive oil. Roast for about 6 minutes, or until lightly browned.

In a food processor, combined cilantro, garlic, salt and olive oil. Puree until combined, then set aside.

In a bowl, swirl together yogurt and Sriracha.

Arrange squash on a serving platter, then top with chili yogurt and then cilantro sauce. Scatter sunflower seeds over top, and garnish with remaining cilantro leaves. Serve as a side dish or a light but satisfying main attraction!

This weekend’s project: Focaccia!
Xin Nian Kaui Le! 🏮🧧🎊 It’s the first day of the Lunar New Year so we made a bunch of dumplings and ate as many as we could.
This week we tackled two dishes out of IN BIBI’S KITCHEN, the glorious cookbook by @hawahassan: Somali beef stew and rice pilaf. The only problem is we probably should have doubled or tripled the rice recipe—it all got eaten too fast!
We broke into #DessertPerson by the incredible @csaffitz for this Black Sesame Paris-Brest—essentially a giant pâté à choux ring filled with black sesame pastry cream.
Controversial latke opinions: The proper ranking of toppings are 1. Ketchup 2. Greek yogurt 3. Sour cream and then apple sauce never.
We cook pasta with zucchini maybe once a week, minimum, but we realized most people didn’t know how easy and delicious it is!
Loading Comments...
Comment
×
<span>%d</span> bloggers like this: